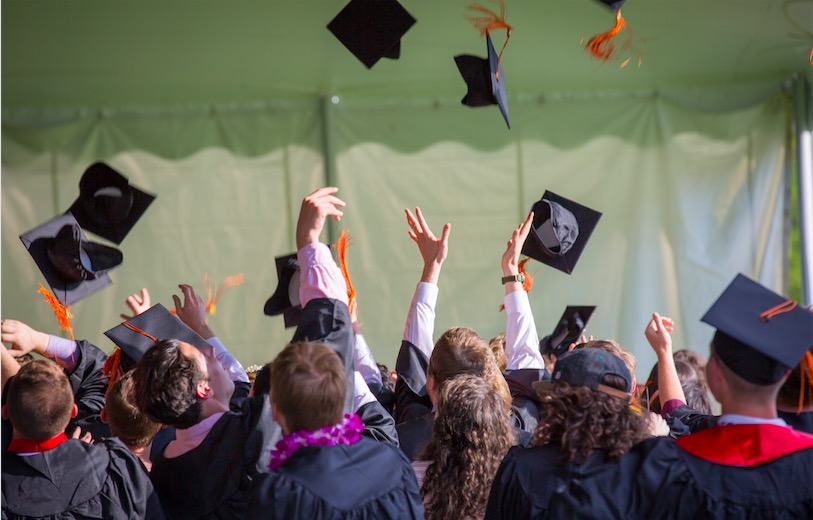 Last year, 4 million students graduated from US colleges. These new graduates face an exciting time of their lives as they search for their first jobs and apartments. Many look to relocate from their college towns to cities full of career opportunities and exciting social prospects.

67 percent of Generation Z is willing to relocate for a good job. In fact, younger generations are more likely to move than the ones that came before them.

If you are a new graduate searching for the city you want to start your career in, you might want to consider the job opportunities, rent, and demographics of your area. Multiple factors come into play when ensuring the best chances of balancing an exciting job with a vibrant social life.

Pheabs has crunched the numbers to find a list of the top 15 cities new graduates should consider. The majority of our data comes from the U.S. Census and the Bureau of Labor Statistics.

We compared a list of the largest U.S. cities against data from rent.com, as well as Labor Statistics, US Census Data, and the Finder Cultural Diversity Index, to rank for 5 categories:

Average rent for a studio apartment

Many new graduates will be renting their first apartments. With an entry-level job or internship, it can be sad to see a huge portion of one’s earnings going to a landlord, so we prioritized cities that offered low rents.

Young people’s love of big cities is statistically supported. The more people who live in your city, the more social and career opportunities you are exposed to. Relocating and leaving your college friends behind can be difficult, so it can be reassuring to know you are joining a large pool of people.

New graduates will tend to prefer vibrant cities filled with people their own age. This makes it easier to find friendship, activities, and romance. For context, the city with the highest median age is The Villages in Florida, at 66.4 years, and the median age of the U.S. is 38.1 years.

Gen Z is the largest and most diverse generation in U.S. history, and they have been polled to embrace and value diversity more than other generations. We used the Finder Cultural Diversity Index, which ranks U.S. cities for diversity in sex, race, ethnicity, age, language, and place of birth.

When searching for a new city to move to, the unemployment rate can give an idea about job prospects. This is important if finding a job is a key reason for which you are choosing to relocate.

An important factor for young graduates starting their career is their earning potential. Ambitious graduates will want to move to cities where the average yearly salary is higher.

Texas is a very promising state – with three of our top 15 cities being Texas-based. These cities tend to offer low rent prices, low median ages, and plenty of activities to do outside work.

Nightlife is popular – although arguably secondary to employment opportunities and affordable housing, it was a huge theme in our finalist cities. Almost all of our chosen cities have a great selection of clubs and bars for young professionals to enjoy.

The capital of Silicon Valley, San Jose, was the top contender in 3 out of our 5 categories. It boasted the lowest unemployment, highest average salary by far ($93,450/yr), and highest level of cultural diversity.

The popularity of the city among retirees raises the median age, but with its brilliant nature and an abundance of jobs, it is a great place for young people too. There is plenty to do here, including a diverse nightlife scene and a range of festivals. 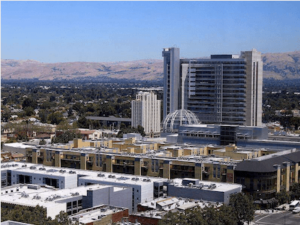 Tulsa is a dynamic city with a lively arts scene. It is a city full of beautiful Art Deco architecture, yet it boasts the lowest average rent ($450/m) in our list.

It scored well across the board, with above-average salaries and a high level of cultural diversity. Tulsa is a small city, but its up-and-coming nature could make it a valuable place to plant your roots. 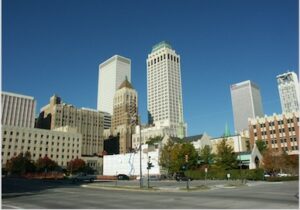 Phoenix scored well across all our categories. It has a low median age of 33.9. It is home to a growing job market as well as affordable housing and a wide selection of hiking trails.

Phoenix is a great choice for people interested in sports such as mountain biking, kayaking, hiking and golf. The weather tends to be sunny, and Phoenix is surrounded by beautiful nature, making it perfect for people who love the outdoors. 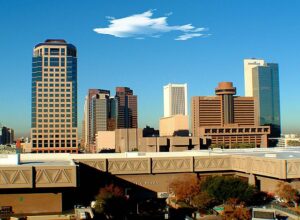 Seattle has the highest metropolitan population on this list (3,928,498). This Pacific Northwest city offers not only a booming job market but also diverse culture, from food to art. This city has more arts-related businesses and organizations per capita than any other metro area in the U.S, making it a great choice for creative-minded graduates. 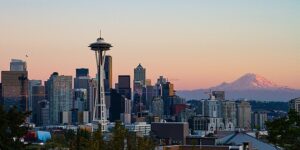 The second Californian city on the list, San Diego offers great diversity and good salaries (averaging at $72,569/yr) . It is a city known for its energetic nightlife, beautiful weather year-round, and plenty of beaches. San Diego is a great choice for young people who enjoy the sun and sea. 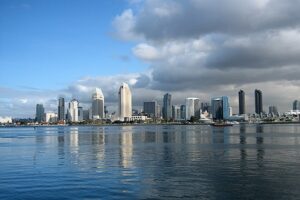 “Live Music Capital of the World”, Austin has a lively bar scene, and the lowest median age on this list (32.4). Austin is known as the state’s “weird city”, and is a great choice for young professionals who value a vibrant nightlife. It has a high metropolitan population, and plenty to do. 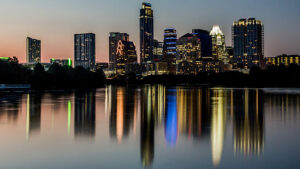 The city is home to several big companies as well as 850 square miles of stunning beaches. The median age in Jacksonville is also the youngest in the state of Florida. 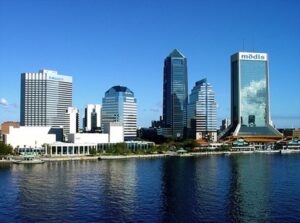 Dallas has the second lowest median age on the list (32.9), and a huge metropolitan population. This city is home to the largest arts district in the country, with the Dallas Arts District measuring over 19 city blocks, making it a great place for people who love culture. 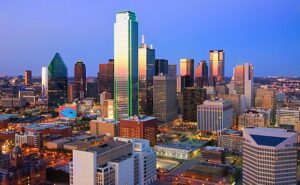 The average annual salary in Denver is significantly higher than the U.S. average. It is already popular with young professionals, and the activities offered in Denver reflect that. Although the rent can be high, there is plenty to do, with extensive nightlife options and museums, as well as convenient access to the nearby Rocky Mountains. 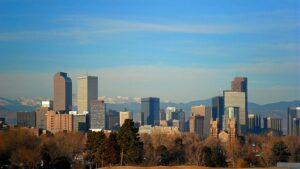 Chicago is the third-most populous city in the United States, with a metropolitan population of 2,693,97. It boasts Michelin-starred restaurants, a thriving food scene, and world-class business districts.  Ambitious young professionals will find plenty of opportunities for work here.

Chicago is also famous for its night scene, constantly topping lists of party cities. It has a huge range of bars and clubs, but also boasts many jazz establishments for a more laid back vibe. 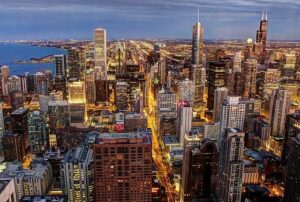 Houston is one of the largest and fastest-growing cities in the U.S., with a huge metropolitan population (2,320,268), and some affordable renting options. It is home to a huge number of emerging startups and Venture Capital firms, perhaps owing to its thriving workforce of young professionals and favorable tax policies. 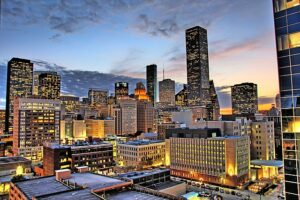 Colorado Springs is forecasted to more than double its population before 2050 due to projections for job opportunities versus living costs (such as its average studio rent price of $949). It is a small-business-friendly city with plenty to do, from outdoor pursuits to relaxing cafes.

This is one of the more peaceful options on the list, for young people who prefer to take it slow. 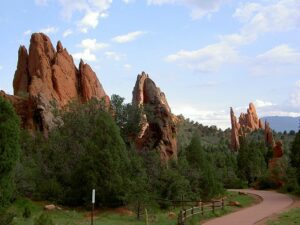 San Antonio has a huge metropolitan population (1,547,253) and a high cultural diversity index (26.4), making it an attractive choice for young professionals interested in socializing.

This city has a majority population of unmarried adults, making it a great choice for single people interested in dating. The city has a UNESCO-approved food scene and plenty of cultural activities. 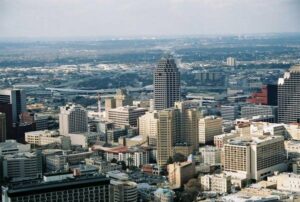 Atlanta has a low median age (33.2), and it offers salaries above the national average ($64,179/yr). It is a major employment hub, with young professionals moving to boost their careers.

The city is home to dozens of Fortune 500 companies as well as an abundance of job opportunities. It is also known for its vibrant nightlife, as well as a diverse food scene. 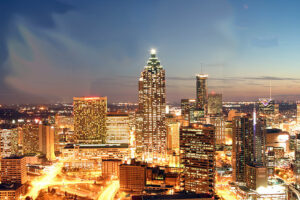 Philadelphia is already a popular choice with young professionals. You can find plenty of job opportunities, nightlife options, and a great local art scene.

The cultural diversity index is high (27.8), and the population is huge. Residents of Philadelphia enjoy low housing costs and a steady economy, making it a great place to move as a new graduate. 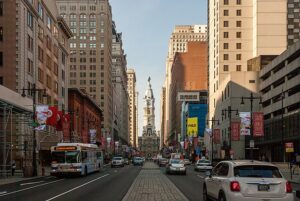